According to the latest provisional data available for the period 2014-2016*, the universities of the A-4U are among the top 20 Spanish entities for economic return in EU’s Framework Programme for Research and Innovation ‘Horizon 2020’.

Moreover, the total of Spanish entities have obtained grants representing EUR 1.933,8 million in calls for proposals between 2014 and 2016. This results in 9,8% EU-28 of economic return for Spain, and a 4th position in the ranking of EU countries with highest number of grants, following Germany, UK and France. These provisional results already surpass not only the total Spanish participation in VII Framework Programme (8,3% EU-28), but also the target objectives for the whole period of Horizon 2020 (9,5%).

On 17th March, YERUN members gathered for their General Assembly, hosted by Universidad Autónoma de Madrid with the assistance of the representatives of A4U. The meeting was chaired by Prof. Juan Romo (YERUN President).

Members decided on upcoming priorities for the network taking into account the YERUN Strategic Plan adopted for the period 2016-2020. YERUN members will continue working on research and education collaboration, knowledge exchange and graduates’ employability. The General Assembly also adopted by unanimity a BREXIT statement in order to emphasize the importance of scientific and educational collaboration during the negotiations between United Kingdom and the European Union now that the UK Government has triggered article 50 of the Treaty of Lisbon.

The next General Assembly will take place on 26th October at University of Ulm, in Germany.

In addition, the A-4U has held meetings with the Spanish Embassy in Malaysia and Aula Cervantes in Kuala Lumpur. 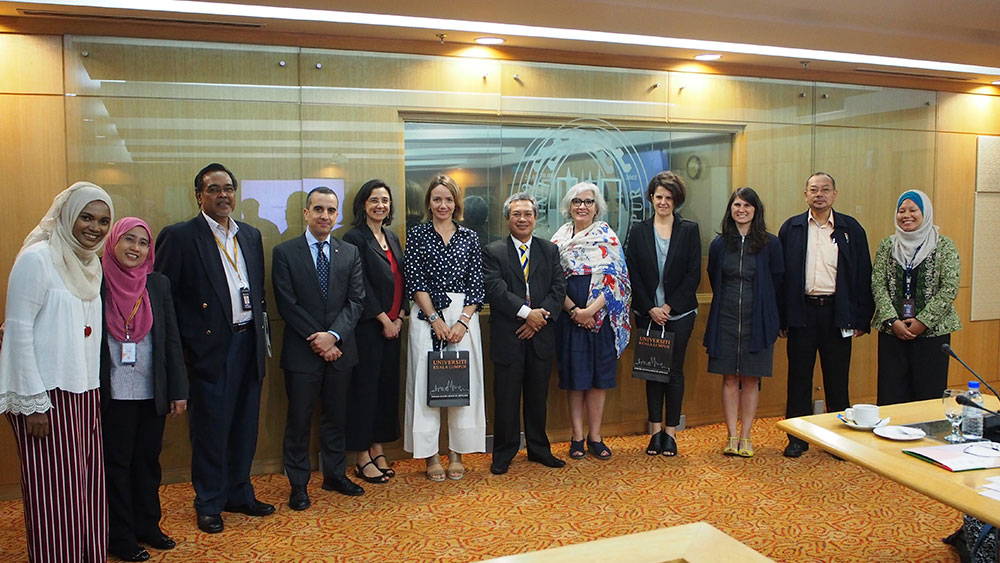 After recently awarding Universidad Autónoma de Madrid and Universidad Carlos III de Madrid, all of the A4U universities have been acknowledged by the European Commission with the “HR Excellence in Research” award. This recognition supports those research institutions and funding organisations for aligning their human resources policies and strategies with the principles of the European Charter and Code for Researchers, fostering attractive research careers.

The process usually starts off by creating a multidisciplinary team that carries out several consultations within the academic community. The aim is to design an Action Plan that allows achieving a stimulating and favourable working environment, which should not only attract the best researchers in the world, but also keep their talent.

Attending the meeting were the four rectors and members of their management teams. It reviewed the main achievements of 2016 and served to sketch out new lines of action with a view to 2017, marked by the firm intention to promote new joint projects.

In the field of research, the high impact achieved so far in the Horizon 2020 programme of the European Commission stands out, with resources being obtained in competitive calls by the four universities. UPF stands out especially in Pillar I of the programme, “Excellent Science” with 38 grants, UC3M in Pillar II, “Industrial Leadership”, with 12 grants, and UAB in Pillar III, “Social Challenges”, with 15 grants.

Moreover, this year the IUNE Observatory has become established and become a national benchmark used by many universities to decide their future strategy. The A4U observatory conducts an annual analysis of the research activity in Spanish universities with comparative data.

In the field of internationalization, the joint work by the Alliance allowed initiating relations with the countries of South-East Asia, as is the case of Indonesia, where a mission was organized to present the academic programmes of the different institutions. The Erasmus+ mobility project has been consolidated with 15 Russian universities and 4 in South Africa, which has benefited 121 undergraduate, master’s and doctorate students.

In teaching, the joint degree in Philosophy, Politics and Economics has become established after three years with a high level of demand and an entrance cut-off mark of 12 out of 14. The degree aims to prepare professionals who are solidly trained in political and economic sciences, with a significant base in moral and critical analysis thanks to the humanities’ input.

The main feature of this degree is the mobility involved, since students study the degree between Barcelona and Madrid, with the possibility of stays abroad.

Finally, with regard to communication, the new A4U website has been presented, with a revamped design and structure that is better suited to the new technological requirements

The meeting also lay down the lines to follow with a view to 2017, which are based on strengthening the alliance, especially in the international arena, to manage to gain visibility and attract the best foreign students.

Work will also begin to provide new joint bachelor’s and master’s degrees between the four universities, in view of the successful functioning of the bachelor’s degree in Philosophy, Politics and Economics.

The Alliance of 4 Universities is a strategic partnership between four public Spanish universities. It was established in 2008 with a joint commitment to promote high quality scientific research and excellence in education. Its objectives are to improve the international mobility of students, researchers and academics, as well as to establish collaborative partnerships in research throughout the world and enhance the international profile of each of the universities.

A delegation of the A4U has participated in the European Education Fair in India, celebrated in Delhi from the 30th of September. The EHEF 2016 has brought more than 100 European organizations from the Higher Education area, being the edition with the largest number of participants.

Last October 6th, Jaume Casals, president of the Alliance 4 Universities and rector of the Pompeu Fabra University had an appointment with Maurício da Silva Ferreira, rector of the Catholic University of Salvador (UCSAL) in Barcelona. The objective of the meeting was to strengthen the ties between UCSAL and A4U in research, teaching and mobility. During the meeting, the organizations signed a Memorandum of Understanding for the next 5 years. This agreement confirms Brazil as a key country for the internationalisation process of the universities of the A4U.

Within the strategic framework for the internationalization of universitiesof the alliance, the A4U has developed an institutional mission to Indonesia in mid-July, aiming at establishing contact and strengthen relationships with key players in the country in the sector Higher Education, such as Universitas Indonesia, the Bandung Institute Teknology Bandung, Universitas Gajda Mada, the Indonesian Education Scholarship (LPDP) or the Ministry of Reshe coordinator of the A4U.