You are here: Home1 / Jordi-Jesús Muñoz

Jordi-Jesús Muñoz, a Master student in European Integration at  Universitat Autònoma de Barcelona, went to the Russian Presidential Academy (RANEPA) in Moscow to study from February to July 2017. During this time he took classes in international relations, international law, Russian culture and language, business negotiation and diplomatic studies.

Upon graduation from the Master programme, Jordi-Jesús started working as a junior consultant for public sector projects in one of the most important consultancies in Spain.

“My stay in Russia definitely helped me both on the personal and the professional level. On the one hand, I got to meet a lot of people from cultures very different from mine, and got to know a country and a system that is growing in importance on the international arena. From the academic point of view, some of the classes were really interesting. On a professional level, the experience helped me get ahead. Together with my previous experience in the United States, I did notice that the fact that I have been to Russia and to one of the most important universities there, made my CV more interesting for multinational companies. Obviously, all that has to be added to your own hard work.

I have very special memories, mainly with the friends I made there and while getting to know the city and the Russian language. I remember I discovered a traditional Russian dish, the khachapuri, that I loved, so I learned the recipe and  cook it at home now.

There were also difficult moments. When I arrived to Moscow the temperature was between -20 and -30 degrees and it was hard to get used to that Siberian cold when one is coming from Barcelona. It was not easy either to relate to the Russian people and the life on the streets. In general the Russian society is less open that the Spanish one, and it was difficult sometimes to not feel that warmth of the people.

I would like to encourage any person who is interested to be brave and to take on an experience like this. The professional world is tough and international experiences, especially in non-European countries, are valued more and more. Of course it can be difficult sometimes, but it is definitely worth it.”

Translation. The original story is in Spanish. 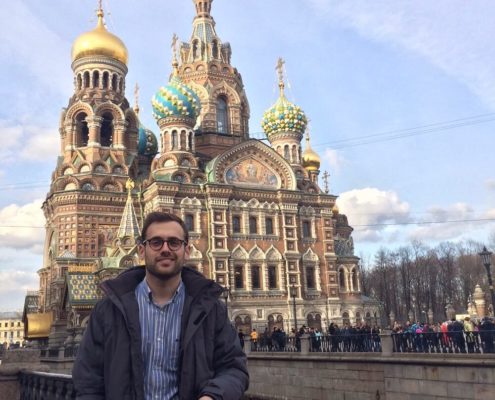