News
You are here: Home1 / News2 / News3 / The first class of the bachelor’s degree in Philosophy, Politics and E... 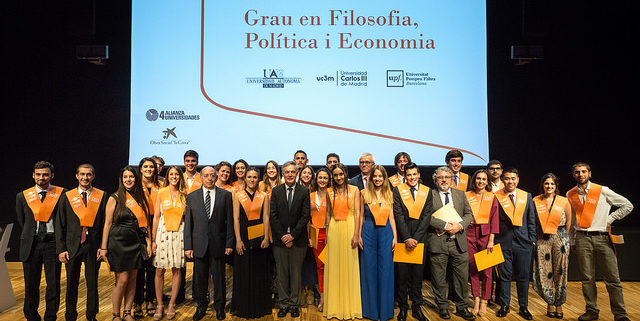 The 26 graduates of the class of 2017 on the bachelor’s degree in Philosophy, Politics and Economics, the first of this interuniversity qualification between Pompeu Fabra, the Autonomous and Carlos III of Madrid, came on stage to collect their diploma commemorating their graduation.

The academic graduation ceremony of the bachelor’s degree in Philosophy, Politics and Economics, promoted by the Alliance 4 Universities and with the collaboration of Obra Social La Caixa, took place on Saturday, 1 July at noon, in the auditorium of Cosmocaixa in Barcelona, chaired by Lluís Caelles, journalist and adjunct lecturer with the Department of Communication at UPF.

A welcome speech was given by Àngel Font and a commemorative audiovisual projection of the class was screened, showing the experiences and feelings of several of those involved, thus opening the ceremony, which was attended by relatives of the graduates and other people associated with the degree.

Afterwards, Jaume Casals, rector of Pompeu Fabra University, gave the reading of the text “A reflection on the improbable in our societies”, by Daniel Innerarity, full professor of Social and Political Philosophy, Ikerbasque researcher at the University of the Basque Country and director of the Institute of Democratic Governance. Due to health problems, professor Innerarity was unable to attend the ceremony and so it was finally read by Josep Joan Moreso, full professor of Philosophy of Law and former UPF rector, under the title “A world of meanings”.

After the performance of the negro spiritual I’m Gonna Sing ‘til the Spirit Moves in my Heart by the UPF choir came the highlight of the event, when the graduates went up on stage to collect their commemorative diplomas from the authorities.

Danny Smith Garrido, on behalf of the class of 2017 of the bachelor’s degree in Philosophy, Politics and Economics, addressed a few words to those present at the ceremony, which concluded with a speech by the rector, Jaume Casals, and the performance of the traditional university anthem Gaudeamus igitur, by the University choir.

The bachelor’s degree in Philosophy, Politics and Economicswas launched the 2013-2014 academic year with the aim of training professionals who may practise in public and private institutions, with solid training in political science and economics and with a strong background in critical and moral analysis that can be provided by the humanities, essentially philosophy.

Lasting a minimum of four years, the bachelor’s degree, which since its inception has had one of the highest entrance marks of the University, involves substantial mobility by its students, who take their studies between Barcelona and Madrid, the home of the four centres that make up the A4U. Stages abroad are also promoted.

> Commemorative video of the graduation ceremony posted on UPF YouTube

More scientific productivity and visibility despite scarcity of resources

The rector’s office hosts the general meeting of the Alliance 4 Universities,...
Scroll to top